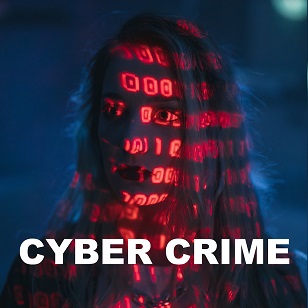 Australian organisations are seen as soft targets for cybercrime and ransomware attacks which are designed to exploit technology infrastructure vulnerabilities, according to cybersecurity experts who warn the problem will get worse unless government authorities fill the “current policy vacuum” in a recently published policy brief.
The report published on Tuesday, 13 July 2021 by the Cyber Policy Centre of The Australian Strategic Policy Institute (ASPI) reviews a range of attacks over the past 18 months which have impacted Australian organisations, including Nine Entertainment, Toll Holdings, various health and aged-care providers, meat processing company JBS Foods amongst others.
The primary sectors that reported ransomware incidents to the Australian Cyber Security Centre (ACSC), which is part of the Australian Signals Directorate, in 2019-20 were health, state and territory government agencies, education and research, transport and retail.
Ransomware attacks often involve cybercriminals exploiting vulnerabilities in an organisation's technology infrastructure to steal and encrypt an organisations data, damage internal networks, demand remuneration to reverse it, and potentially threaten to publish sensitive information that is stolen from an organisation's data repositories.
The total cost of cybercrime to the global economy is estimated to be about $1 trillion by various sources, and so it is prudent that organisations, both large and small, ensure greater defences to prevent an attack in the first place -- every business is at risk, and so preventing the ability for cybercriminals to exploit technology and data vulnerabilities is essential to ensuring organisational resilience.
Read more in the report published on Tuesday, 13 July 2021 by ASPI’s International Cyber Policy Centre following the links below. 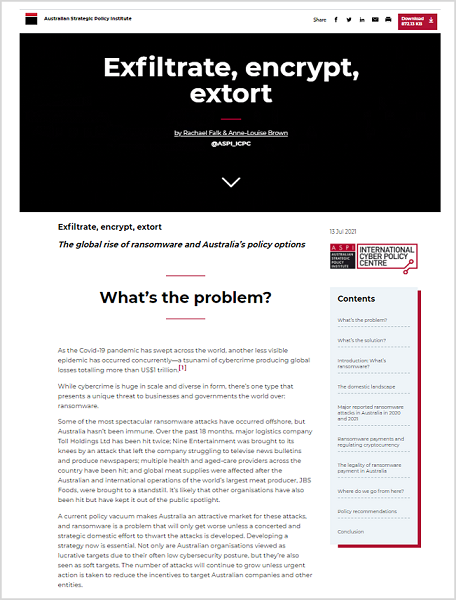 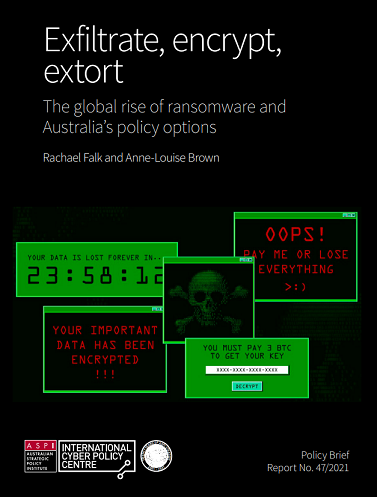